Since the problem is caused by mismatched MTUs, the solution is to change either router MTU to match the neighbor MTU.

Note that Cisco IOS does not support a chang of the physical MTU on a LAN interface (such as Ethernet or Token Ring). When the problem occurs between a Cisco router and another vendor router over LAN media, adjust the MTU on the other vendor router.

or use, in Cisco IOS Software 12.01(3), the ip ospf mtu-ignore interface configuration command, to turn off the MTU mismatch detection.

However, in Dual ISIS, By default, IS-IS hellos are padded to the full maximum transmission unit (MTU) size,

The benefit of padding IIHs to the full MTU is early detection of errors caused by transmission problems with large frames or MTU mismatched on adjacent interfaces.

from a high level, IS-IS operates as follows

Routers sharing a common data link will become IS-IS neighbors if their hello packets contain information that meets the criteria for forming an adjacency. The criteria differ slightly depending on the type of media being used (p2p or broadcast). The main criteria are matching authentication, IS-type and MTU size).

Routers may build a link-state packet (LSP) based upon their local interfaces that are configured for IS-IS and prefixes learned from other adjacent routers.

Generally, routers flood LSPs to all adjacent neighbors except the neighbor from which they received the same LSP. However, there are different forms of flooding and also a number of scenarios in which the flooding operation may differ.

All routers will construct their link-state database from these LSPs.

A shortest-path tree (SPT) is calculated by each IS, and from this SPT the routing table is built.

Sending full size MTU (1500 bytes or any  other Jumbo Sized frames) , Padded Hellos to neighboring routers, would hit direclty on the  performance of the router,  the CPU has no other choice but to process this Big ISIS Hello message received from neighbors, every 10-second hello interval, with the exception of a broadcast segment’s in which the designated router, sends hellos at one-third the normal interval (every 3.3 seconds),  and last but not least,  on low-speed, sending interfaces large hello PDUs is a waste bandwidth!! This off course affects time-sensitive applications such as voice over IP (VoIP).

now after this configuration: 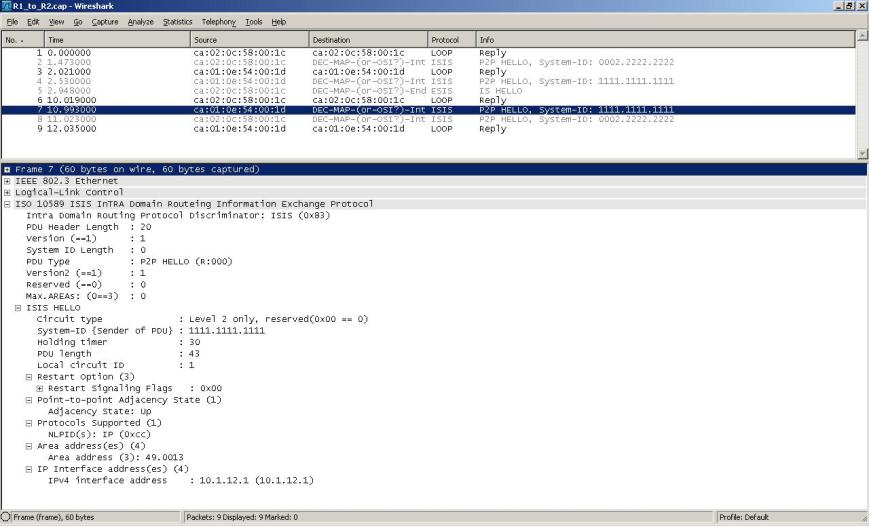